When the daycares were shutting down this past March, Serena Donovan was opening her facility up to 325 babies. At least that’s how she refers to her first batch of cannabis clones. Donovan is owner and CEO of Because You Cann, the second micro-licenced cannabis producer in Alberta and one of a few dozen in all of Canada. 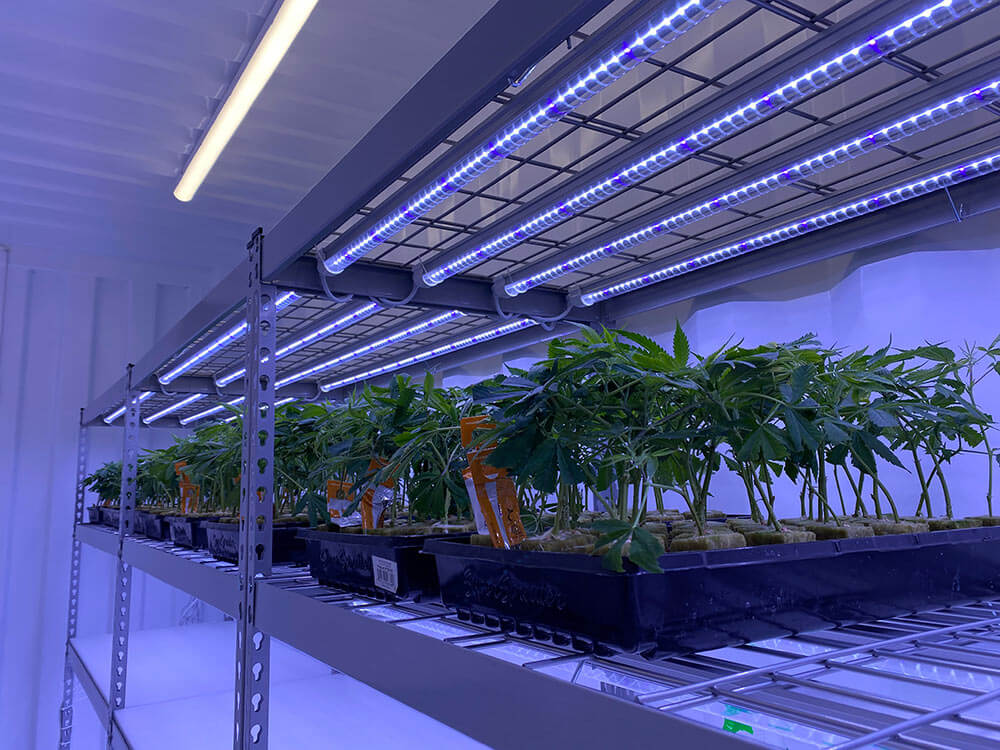 Donovan and her husband Ian are grain farmers just outside of Mossleigh and have been married for ten years. Donovan grew up on the west coast but despite what some may think, she was never into cannabis, in fact, she has always been very conservative. The couple’s decision to diversify their operation came because Cannabinoid Oil (CBD) was the only thing that saved Donovan from chronic migraines. “I was averaging about 16 debilitating migraines a month. I tried every kind of pain medication, from pills to injections and everything in between and nothing helped,” says Donovan. “I was desperate to try anything and even though I was reluctant, I tried CBD oil and within a few months my migraines were down to just two or three and they continued to improve.” Donovan, a Vulcan County Councillor, began to dig deeper and do more research, traveling to other producer’s sites and attending seminars to find out everything about this budding industry.

“There is a stigma attached to this business and especially as a County Councillor, I did not feel open talking about it, much less talking about how CBD has helped me. There is a lot of education still needed and for many, it’s about shifting old perceptions,” she says. “However, as farmers we are always looking for new options, new solutions and new science. You can’t argue with research and results and that’s why we decided to take the risk and diversify.” 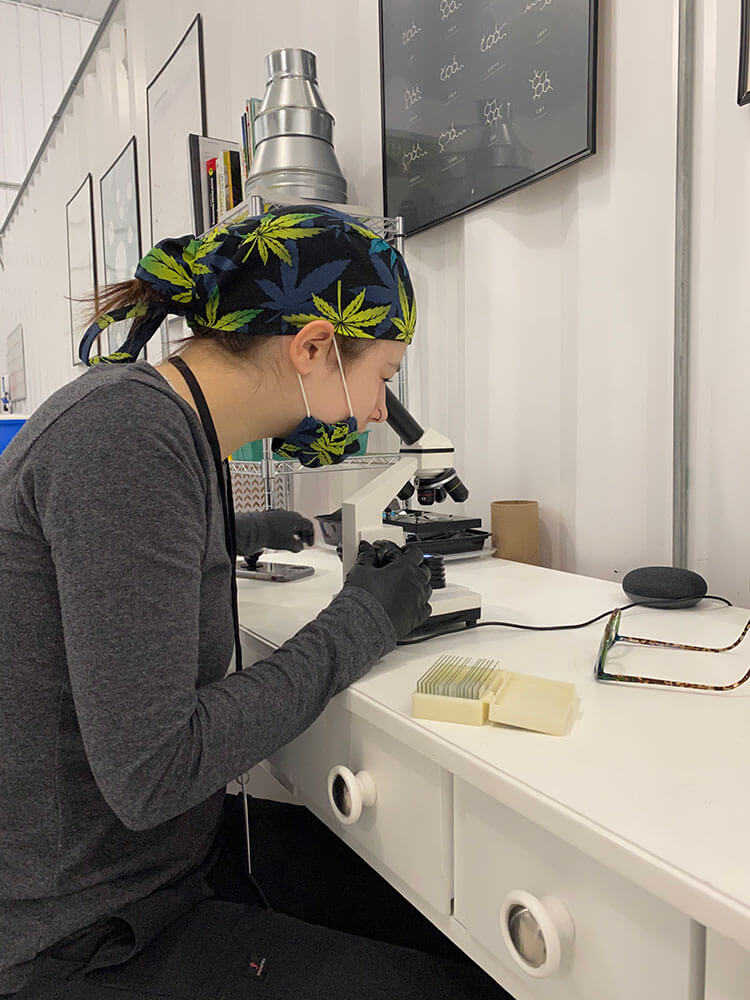 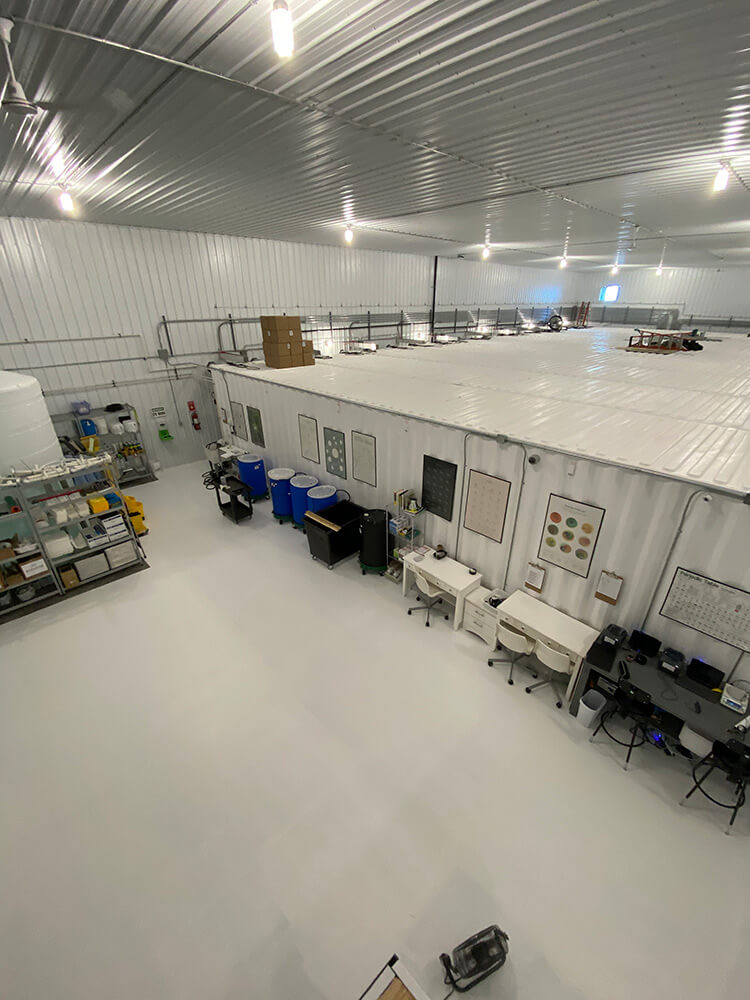 Last April, with the support of her husband, she took over his 60x120 ft. equipment shop and began retrofitting the building. She fitted the interior walls and poured the concrete floors just in time for her Delta 9 grow pods, which are retrofitted sea cans, to arrive in June. Donovan has ten flowering pods, a nursery pod and a harvest/drying pod. Getting everything fitted and set up may sound like a daunting task but according to Donovan, it’s nothing compared to the application for Health Canada. “You have to have your whole operation built out, everything from the buildings themselves to your security system, your operational plan, and site evidence package...everything, before you can even submit your application to Health Canada,” she says. “It’s a huge risk. There’s little to no financing options available in the cannabis space and if Health Canada denies you, that’s it. Game over.” Donovan submitted her six-inch binder application to Health Canada and then waited. After a month, she received the good news that she was approved. She had to wait an additional four months for security clearances to be approved and then followed the same protocol with the Canada Revenue Agency, again waiting for approval which she received in March.

Donovan says that the regulations and guidelines in place are not for the average farmer. “You agree to strict monitoring as a micro-licenced cannabis grower. For example, I am limited to 2150 square feet of plants. No plant can grow outside of the allotted grow canopy or I can be deemed non-compliant and shut down,” she says. “I also agree to be constantly surveyed. We have cameras on us 24/7 that the government can log into at any time, it’s something my employees also need to be comfortable with.” 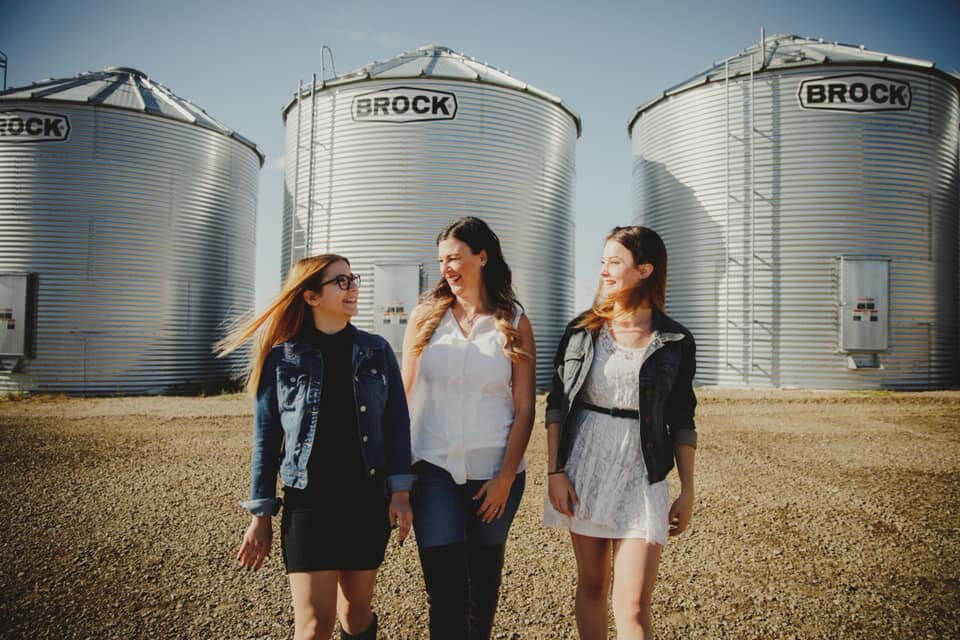 And just like many farming operations, Donovan has also brought family into the fold. Her two daughters Julia and Grace both work alongside their mom helping with the science and genetics of growing cannabis. The Donovan’s also have three other children, oldest son Robert who farms together with dad Ian, and who just opened a custom spraying operation, and their two youngest sons Reese and Riley who also help out on the farm.

Donovan says that opening this past March was bitter-sweet. It was a long-time coming and an exciting day but opening a new operation amidst the pandemic has posed some unique challenges. “All of my supplies were delayed quite a bit but more importantly, trying to protect us all has been the biggest challenge. I ordered PPE when we first opened but that’s running short and we don’t have enough to keep us going much longer. The past three weekends have been spent sewing masks and caps so that we can continue working safely.”

Donovan says that despite the challenges, business has been good and now they are off to a strong start. She adds that many farmers look to how they can diversify and stay competitive and she’s proud to have taken a risk to farm in a different way. “My operation is unique in that I farm indoors, but it’s still agriculture. It’s just a different kind of farming,” she says. “And like many farmers, when harvest time comes there will be mixed emotions. It’s that moment when you have spent a season pouring your heart and soul into watching these tiny plants grow and flourish and if you’ve done your job, they’ve grown how they are supposed to, and then it’s time to say good-bye and start new. I think my first harvest will be an emotional one. With the office to run, I’m not in the pods as much as I want but I am most at peace when I am with my plants, nurturing them. I know seeing them go will be tough.”

Donovan looks forward to being part of a collective, information sharing group of farmers. “The micro-licenced cannabis industry has a different mentality. We aren’t competing with one another like the big producers,” she says. “I have always been supportive of people working together for the greater good. Perhaps it’s one of the reasons we have been loyal UFA Co-operative members as well. As micro-producers, we are committed to working together to help one another and at the end of the day, that feels pretty good.” 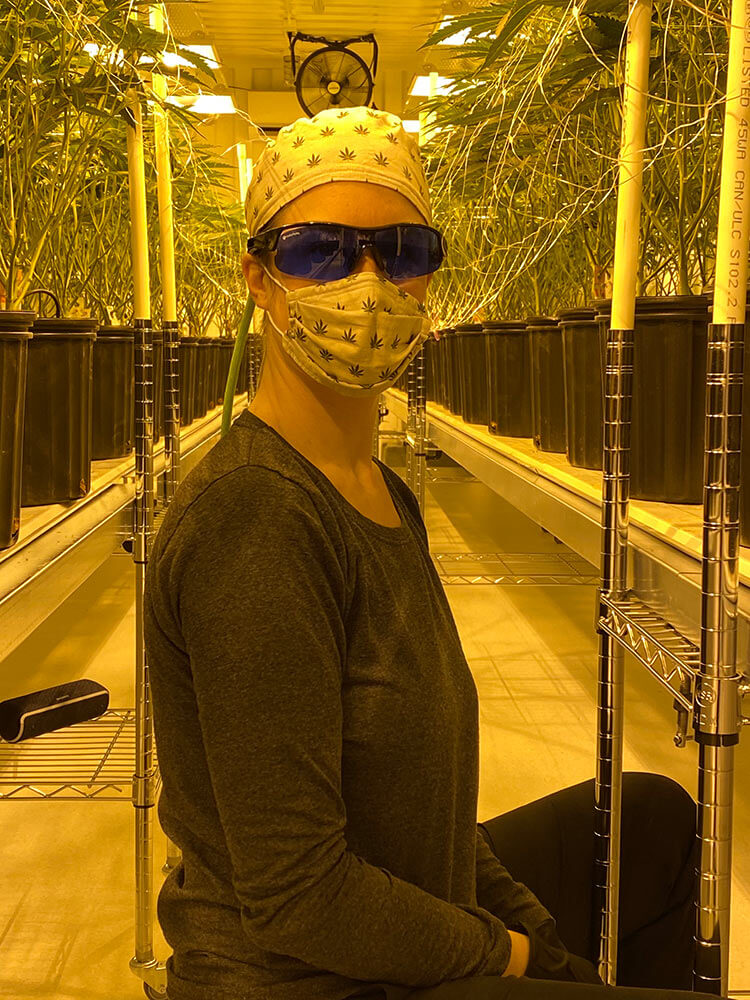 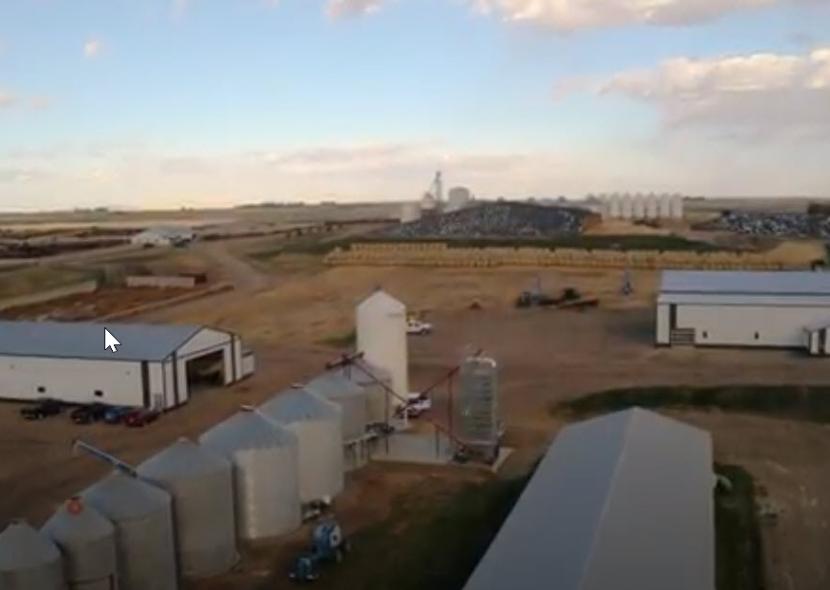 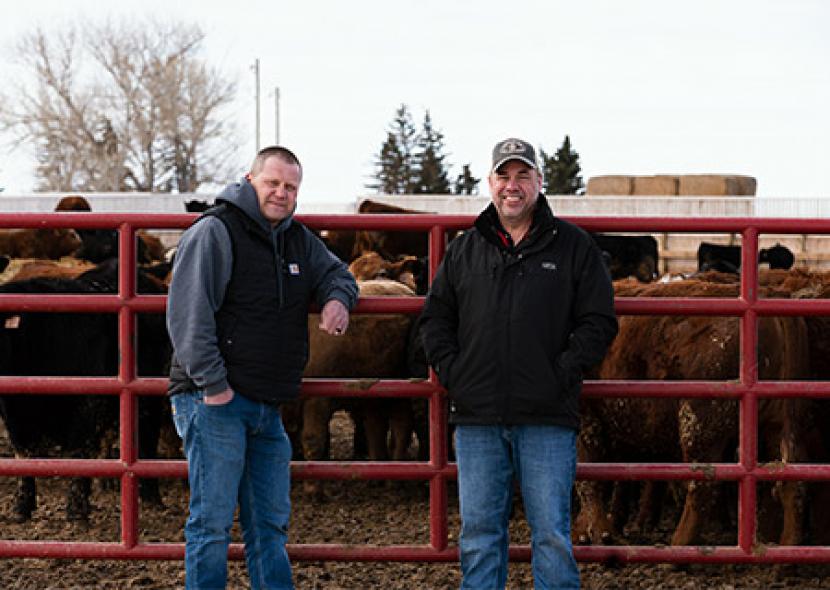 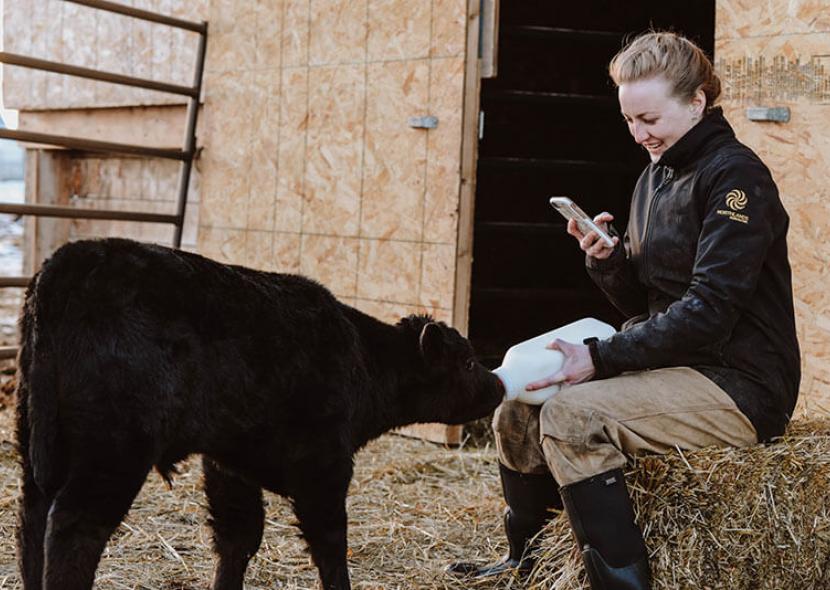 UFA Corporate Communications | July 21, 2020
The Wasylik family calls Chatsworth Farm home, the place where for them, all is right and good with the world. Dad, Rick, loved read more...