Heading to Pasture & Playing Catch Up 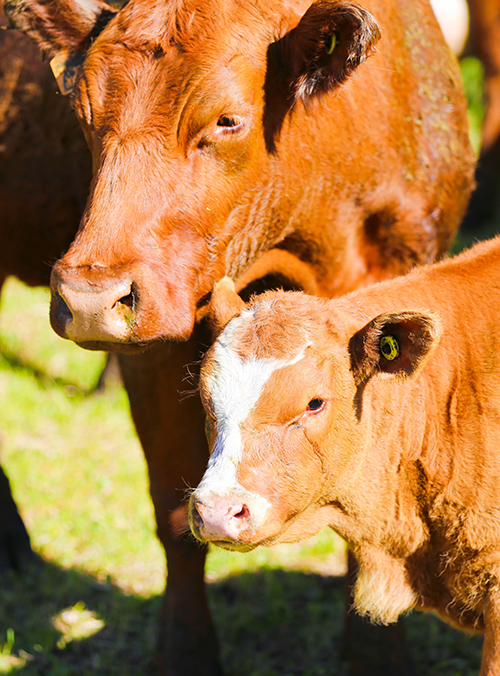 THE IMPORTANCE OF MINERAL SUPPLEMENTATION THIS SEASON

The thought of heading to pasture comes with a huge sigh of hopeful relief for many cow/calf producers throughout Alberta after being presented with drought conditions last fall, followed by perhaps one of the toughest winters Mother Nature has thrown at us for decades.

Spring pastures and the 2018 grazing season will no doubt be a very welcome sight, however, as Cow Calf Nutrition Advisor, DJ Woodward, ADM Animal Nutrition cautions – now, more than ever, the importance of additional nutritional support, one that includes mineral supplementation on pasture, will play a critical role when it comes to breed back conception rates, the health of your calf crop and of course your bottom line.

"Many cows are now in low body score and poor condition . . . catch-up will need to continue on pasture through the breeding season."

"There is no doubt that this calving season has been demanding on producers as well as their cows and calves," says Woodward. "As they head to summer pasture I expect there will be many cows looking a little worse for wear this year. The requirements on the cow just to stay warm have been higher than normal as she used a lot of extra energy just to keep warm or simply stay alive. In addition to that, many cows came off of drought ridden pasture last fall. As a result, many cows are now in low body score and poor condition. I have had more than a few conversations with producers this past winter who are playing catch-up at the moment with their cows and this catch-up will need to continue on pasture through the breeding season."

As cows in poor body condition do not breed back readily, a drop in body condition below 2.5 can reduce conception rates by 15 per cent. Without proactive measures, Woodward worries that some Alberta ranchers could be poised for some major wrecks this breeding season, with negative long-term effects for producers.

"Unfortunately, there could be a few open cows this breeding season because of the long winter and the extra requirements on the cows. Rebreeding concerns me when the cows are thin, they have a nursing calf at side and now we are asking them to breed back. This is the time of year the cow has the highest nutritional requirements.

When faced with a nutritional challenge or poor body condition:

We call this a "Positive Energy Balance."

For the cow, that's a tall order, but one that providing mineral supplementation can assist with says Woodward, as (trace) minerals play a significant role in increasing digestion and increasing forage intake. As a result, they allow the cow to eat more and therefore put on more weight.

THE ROLE OF MINERAL SUPPLEMENTATION IN RECOVERY

Both minerals and vitamins are essential nutrients for cattle. Combined, they participate in all aspects of the animal's metabolism, growth, reproduction, immunity and health.

"We have studied mineral supplementation more than anything else in this industry," says Woodward. "If you took all those studies, dissected them and then added them all up, they would tell you that you would see somewhere around a 19 to 20 per cent gain in the digestibility of your forage, just by feeding mineral alone. This is because even the trace and macro minerals all play a major role in digestion. They help the rumen microbe population be healthier and when there are more rumen microbes to digest the feed, it can increase the digestion by 20 per cent, therefore allowing the cow to not only get more out of the feed, but also allowing the cow to eat more, so there is a double effect."

What also happens says Woodward, is that 60 per cent of the cow's protein needs will come from dead rumen microbes, called microbial protein, which are utilized when they pass through the digestive system.

"The cow is very efficient that way. Most people don't know about microbial protein, or that they can feed a cow a bag mineral and increase her protein without providing any additional protein through the feed," says Woodward.

This, he says, is because by feeding mineral to their cows, they have accomplished an increase in her protein by increasing the number of rumen microbes in the rumen – a result of a healthier microbe population. This means there are more rumen microbes available to die and become protein themselves in the digestive system. According to Woodward, the lifespan of these rumen microbes is only 15-20 minutes.

"Mineral supplementation will be key to catch up and recovery for a lot of cattle this spring." says Woodward."

That is why for producers who typically only place salt in the pasture, Woodward encourages the consideration of a salt that also contains minerals and vitamins to help cattle get back on track this grazing season.

"We know that salt is important and its one of five macro-minerals that cows need, but it is only one of five," says Woodward." For producers who haven't previously offered mineral supplementation, it would be beneficial to consider a trace mineral salt that contains selenium, calcium, magnesium and vitamins. Designed for green grass, it will help with digestion of forages on summer pastures, support rebreeding and is better than salt alone."

For over 20 years, UFA has supported the cattle industry by delivering the tools, products, services and support for successful business. To learn more about our products, please visit your local UFA or connect with one of our Livestock Specialists by calling 1-877-258-4500, Option 1 or contact one of our livestock representatives.